A script that exits as a "failure" too many times, will be put into a FATAL state and supervisor will no longer attempt to relaunch it. A script run is considered a failure if it exits with a non-expected exit code or if it doesn't run for the required minimum amount of time (default of 1 second). Depending on your circumstances, this might be problematic.

In case your interested, here is the Subprocess State Transition Graph taken directly from the docs. 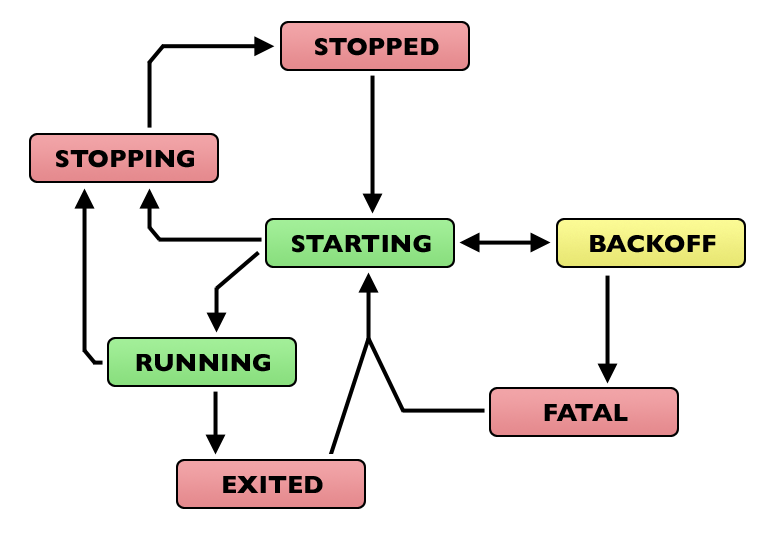 One way to try and resolve the issue is to try and program your script/process to handle every possible situation and exit cleanly. This is probably the "proper" solution but requires a lot of effort and future updates may add more scenarios that don't get captured. Not to mention, "stuff happens" and there will likely be scenarios you don't think of.

The startretries option (default 3) specifies how many times supervisor should try to restart the process before it enters a fatal state and supervisor gives up. You could just set this to an absurdly large number to the point where it is almost infinite. For example, have your script sleep for 3 seconds at the start and set this to 9999. This would result in supervisor retrying for over 8 hours before it gives up. By then you have probably noticed/fixed the underlying issue, such as your database being down and your script being unable to connect.

The exitcodes option (default 0,2) specifies the exit codes that supervisor should accept as valid, and not cause the script execution to be a failure. You could change this list to include all of your erroneous exit codes. I noticed that my PHP script in the log was exiting with code 255, so I just need to add that to the list.

Once you add the exitcodes to your configuration, when the same error occurs now, you should see expected in the log:

A Note About The "Backoff" State And Minimum Running Time

I also tested with just relying on the startretries option and was surprised to see that supervisor did not enter a backing off state, which would result in it taking longer and longer before retrying to start the process. After re-reading the documentation it became clear why:

When an autorestarting process is in the BACKOFF state, it will be automatically restarted by supervisord. It will switch between STARTING and BACKOFF states until it becomes evident that it cannot be started because the number of startretries has exceeded the maximum, at which point it will transition to the FATAL state. Each start retry will take progressively more time..

BACKOFF - The process entered the STARTING state but subsequently exited too quickly to move to the RUNNING state.

So in summary, the BACKOFF state does not apply to a script returning an incorrect error code, but a script not running for the minimum amount of time (startsecs). This seems counterintuitive to me but that's the way it is. So even if your script executed successfully, if it doesn't run for the minimum amount of time, it will enter a backing off state, causing it to be run less frequently, and eventually enter a FATAL state. To stop this, you may wish to manually set startsecs to 0 instead of the default of 1.