One To One Relationships

Rule of thumb: Use this method when this model's table has the column that contains the ID of the other table's primary key (foreign key).

Please refer here to avoid me having to duplicate.

One to Many Relationships

Laravel will guess the name of the column in the other table that should be referring to this table. However, you can manually specify it. In this example, we are editing the users table with hasMany() to refer to the author_id column in the events table, rather than the name user_id that Laravel would otherwise guess.

Taking it further, if one needs to specify the local column that is being referred to (e.g. its not the field marked as the primary key in this model, which is usually id), then one can specify that as well. In this example I am specifying this model's/table's legacy_id field as the one being referenced.

Not only does belongsTo() work in one-to-one relationships, but it also applies to one-to-many relationships. This is because there is still just one "parent" model that this child model being edited is associated with. In this case, there are just multiple children instead of just one. 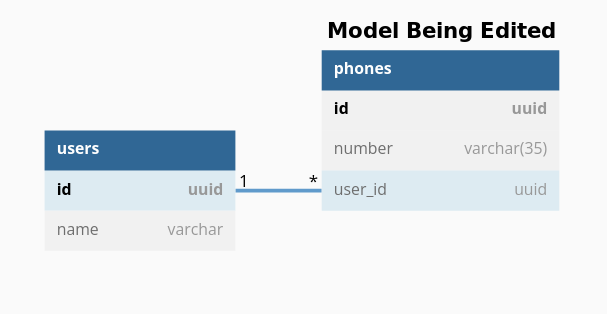 Rule of thumb: Use this method when this model's table has the column that contains the ID of the other table's primary key (foreign key).

If one is not using naming conventions that Laravel expects, then one can manually specify the name of the local column and the remote table's column like so: 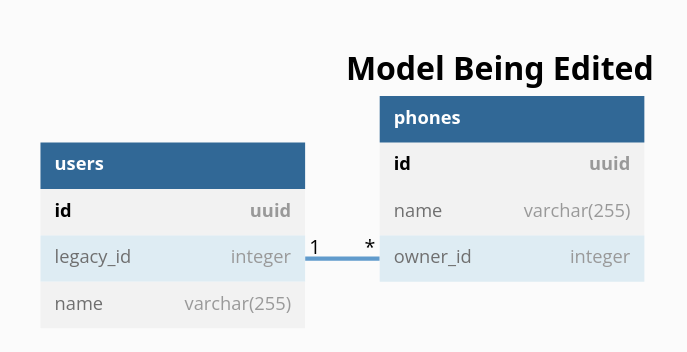 As you can see, we are specifying the local column as owner_id, instead of Laravel guessing user_id, and telling Laravel that this references the legacy_id column on the remote table, rather than the id column.

Use this relationship when you wish to get to another model through an intermediary. However, be careful to check that the relationships are many-to-one, and not actually many-to-many. In case of many-to-many, you will want to use belongsToMany() instead.

Many To Many Relationships

Use this relationship whenever there is a many-to-many relationship through the use of a mapping table (Laravel refers to this as a "pivot table").

One To Many (Polymorphic)

Just don't. Pretend you never read anything about this.

You would either have to not set up foreign keys on your tables, or if you do manage to, you will have to create a messy/confusing solution. In case it comes up, don't forget that PostgreSQL inheritance (currently) has a lot of caveats that pretty much make it useless.

Just have a think, and I'm sure you will be able to come up with a much better solution where you can have database normalization and your foreign-key set up correctly.